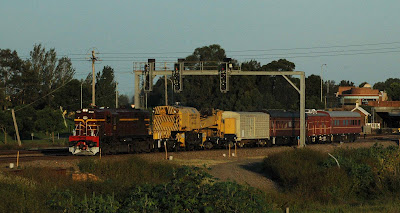 Unique 120ton capacity breakdown crane LC1060 has made its last mainline journey and entered preservation thanks to the Lachlan Valley Railway Co op and haulage by Goodwin Alco loco 4501.
Once an essential part of loco depot inventory, the era of rail breakdown cranes has sadly past with modern day preference being to use mobile road cranes to clear mishaps.
1060 also known as "The Krupp" spent recent years languishing at the former Lithgow Depot and has been purchased by the Dorrigo Steam Railway & Museum group who had long considered it to be an essential addition to their collection. Efforts by LVR oldmates saw the crane serviced and certified for travel and with ARTC & RailCorp approval, the Krupp was hauled to West Tamworth over 2 days by Goodwin Alco loco 4501. Due to the cranes enormous 22.3ton axle load its maximum permitted speed was 50kph from Lithgow to Werris Creek (via Sydney) and then finally 30kph from Werris Creek to West Tamworth.
Thanks to good planning and the Krupps reliable german engineering the haulage task went off without a hitch and was delivered to its new owners after a 17 hour journey.
Posted by Old Mate at 2:42 AM No comments: